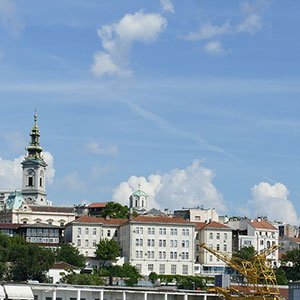 Sail from the Danube Delta of the Black Sea to Hungary’s capital of Budapest to experience river views like no other. Begin your Danube River vacation your way before your cruise with an overnight stay and sightseeing in Bucharest. Drive into the Carpathian Mountains to Sinaia to visit the grand Peles Castle. You’ll continue to Transylvania for two nights in Brasov. Take a guided tour of the city by day, followed by a tour of Dracula’s Bran Castle by night, and enjoy guided sightseeing in Bucharest. Enjoy superior hotel accommodations with complimentary breakfast, an expert Local Guide, and courtesy hotel-to-ship transfer. From Bucharest, travel to Cernavoda to embark on your Danube River cruise. Take in the incredible views along the way, beginning with the Danube Delta at the Black Sea for a small-boat guided tour of some of the 2,200 square miles of delta preserve. Celebrate Kilometer “0” to mark the Danube’s culmination of 2,845 kilometers from the Black Forest to the Black Sea! Your cruise on the Danube River carries you through the striking landscapes of the Balkans. In Bulgaria’s largest inland port, take a guided sightseeing tour of Rousse, including the Holy Trinity Church, or spend a full day with a guided tour of the Bulgarian capital of Veliko Trnovo, where ancient stone houses cling to the Yantra River cliffs. One of the oldest towns in Bulgaria, Arbanassi holds Bulgarian Revival architecture within its 15th-century locale. Guided sightseeing In Vidin is followed by a guided tour of Belogradchik, with its ancient fortress and tremendous rock formations on the Balkan Mountains. Next visit Lepenski Vir for a guided tour with ancient archaeological finds before cruising through the narrow Iron Gates Gorge. In Serbia, take a guided tour of Belgrade, including one of the world’s largest Orthodox churches, and see the most preserved Croatian fortress in Osijek. You’ll also attend a stirring performance by young students of the Franjo Kuhac music school. Tour the historic towns of Mohács and Pécs before cruising to Budapest to conclude your amazing cruise on the Danube.

Prices are per person, land or cruise only, based on double occupancy. Offer subject to availability and change without notice. Some restrictions may apply. Please ask us for details.

Charges not included in the land vacation price: airfare to and from the start of your vacation; airline baggage fees including checked and/or excess baggage fees; Federal inspection fees for the Federal U.S. Customs and Immigrations; agricultural tax; other per person taxes imposed by government entities; applicable cruise taxes, fees, fares and port charges; passports; visas and vaccinations; transfers; tips to your Tour or Cruise Director, Local Host, driver, Local Guides, and/or ships’ crew; gratuities on ferries, trains, and cruise ships; laundry; telephone; minibar; alcohol, beverages, and food outside of the contracted menu as presented at a hotel or restaurant (these extra items will be billed to you before leaving the hotel, ship, or restaurant); additional excursions and activities not listed as ‘included’ in the itinerary; porterage at airports or train stations; Travel Protection premiums; and all other items of a personal nature.

Click on the buttons below to request a quote on this deal or contact us directly with further questions or comments.

Request A Quote Send To A Friend Have A Question? Contact Us

Send To A Friend